Electromagnetic interferences are an issue that affects servo drives and the electrical equipment surrounding them, and it can cause several inconveniences:

Fortunately, understanding the problem with the models presented in this document should allow solving most of the EMC problems with simple actions on the system design stage (preferred) or on the field. This document is intended to show a framework to understand and solve the problems instead of repeating once again vague rules of thumb such as connect the protective earth, shield the cables, or add ferrites.

Electromagnetic compatibility (EMC) is the ability of electrical equipment and system to function satisfactorily in their electromagnetic environment, by limiting the unintentional generation, propagation, and reception of electromagnetic energy which may cause undesired effects such as Electromagnetic Interference (EMI) or even physical damage in the operational equipment. It is essential to differentiate the 3 elements involved in EMI: 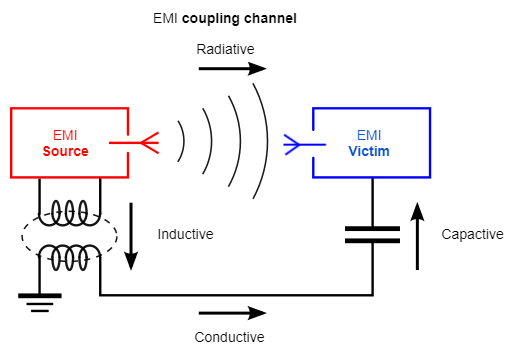 To quantify the impact of the interference on the victim, there is a simple yet practical model to know which will be the induced effect. It considers the source - channel - victim as a voltage divider. Since most problems happen with transient and AC signals, instead of resistors, the divider should be made with impedances. For simplicity, it is usually not necessary to use complex numbers for Z but just use absolute values of impedance and voltages instead. 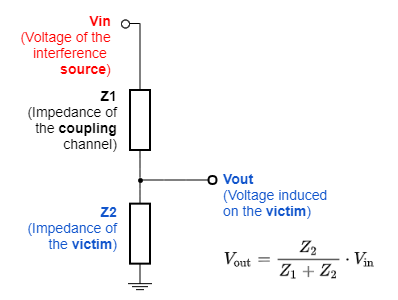 Vin is the amplitude of the noise source.

Vout is the voltage induced on the victim circuit.

Z1 is the impedance of the coupling channel. The Z should be calculated at the fundamental frequency of the interference.

f is the fundamental frequency of the interference.

Note that sometimes the problematic frequency is NOT the obvious one. For instance, the motor phase's fundamental switching frequency 10 kHz ~100 kHz typically does not create problems. Instead, the problems come from the harmonics between 10 MHz and 1 GHz. The same happens with most hard switched signals and crystals, always consider the harmonics that are related to the transitions, not only the main frequency.

Understanding this model quantitatively will make many of the actions indicated next crystal clear. Following is a description of the source, channel, and victim:

EMI Sources from the Environment

External interference sources can be categorized according to the EMC standards in the following categories:

EMI Sources from the Drive System Itself

To get an idea of the frequency spectrum generated by the power stage we can consider the phase as a trapezoidal waveform with very short rise and fall times that can range from 200 ns to 5 ns depending on the power stage technology, operation point, and parasitic capacitances. The following graphs show the envelope of harmonics of that trapezoidal wave and how to estimate its magnitude.

Although it may be counterintuitive, the more perfectly square the phase voltage is, the more high-frequency interference it will carry. Filtered motor phase outputs with a common mode choke, for instance, may appear uglier in the time domain (oscilloscope) but may cause fewer EMI problems. Changes in the duty cycle also affect the frequency spectrum. The following image shows the Fourier synthesis of a square wave of 20 V amplitude and 50 kHz depending on the number of harmonics:

The coupling channel is where the EMI is propagated to the victim. It can be summarized in 4 categories: radiative, conductive, inductive, and capacitive.

Note that many couplings do not necessarily occur on a single channel but as a combination of them. E.g. an inductive coupling from the motor cables to the encoder, being transferred via conductive coupling on the PCB to a communications port and then radiated through the communication cable.

The following table explains each channel and which actions can be made to mitigate it:

When encountering interference problems, most people's first reaction is to believe the channel is radiated. However, usually, the origin of the problem is a conductive, inductive, or capacitive coupling with radiation being a secondary coupling channel.

The EMI Victims are the circuits affected by the interference source which is coupled through the channel. Whether this creates a problem or not will depend on the amplitude of the interference on the victim and what this amplitude causes to the receiver: a digital level change, a small amplitude variation, loss of data, or even physical damage to the circuits.

Depending on the victim's circuit the level of immunity can vary. The following table mentions several ways in which immunity can be improved:

The EMC Model for a Drive System 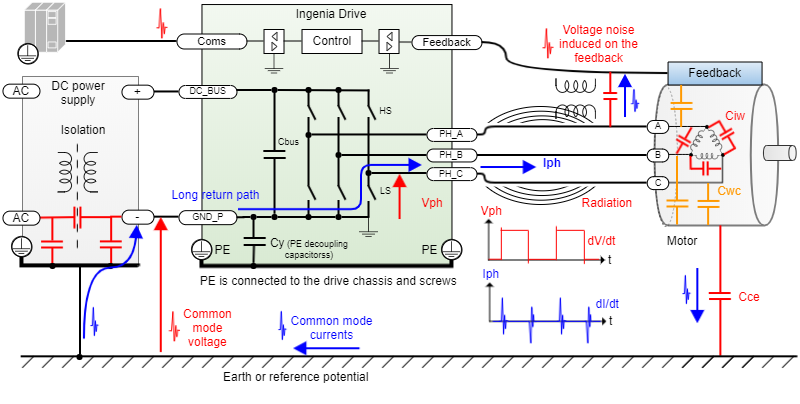 The motor has a strong impact on the overall EMC of the drive system. Its inductance and resistance affect low-frequency harmonics, but more important are the parasitic capacitances that cause unwanted current peaks on each switching:

As can be deduced, even when the average current is zero, large current peaks (in the order of amps) are happening each time the phase changes its voltage. These peaks oscillate and resonate between the parasitic circuits such as cable inductance and parasitic capacitances and cause many of the EMC problems. Indeed they can be radiated by the motor cables or the motor chassis itself.

Motor design and wiring have a big impact on EMI

Depending on the motor and wiring, the same servo drive can work perfectly, have zero EMC issues, or have big interference problems and not meet EMC standards. The ideal motor should have low parasitic capacitances and should have good grounding connections to its chassis.

The following explains why the recommendations repeated on every installation manual are so useful.

Effect of Grounding the Motor, Shielding the Phases and a Choke

The main recipe to solve most emissions problems on servo drives is a combination of the following:

Example of a low EMI solution.

Due to the intrinsic noisy nature of the power drive systems, a line filter is usually necessary when conducted emissions levels should be met. In some cases, conducted EMI is radiated and causes radiated emissions. A combination of differential and common mode filters is usually necessary. When various drives are close, the line filter can be shared between various drives with a common DC bus.

To quantify the conducted emissions, they are measured with a LISN (Line Impedance Stabilization Network) that "converts" supply ripple currents to a voltage that is AC coupled to a spectrum analyzer. Although this LISN is never found on a power drive system, since it is an EMC laboratory device, it has been included here to clarify electrically how the filter can reduce emissions. Shorting the ripples and high-frequency paths with capacitors while blocking them inductive elements. 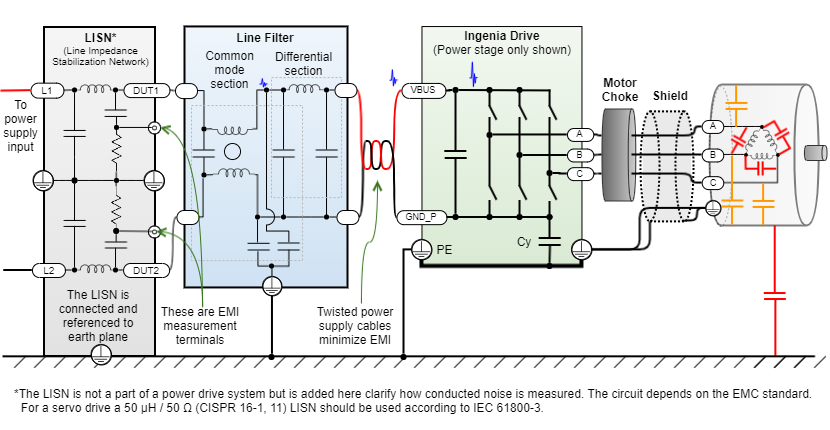 Some interesting points regarding line filtering:

Always dimension the filter after following the previous recommendations regarding the choke, PE wiring, and phases shielding. This will allow using a smaller filter.

When the servo drive is integrated into the motor, the switching interference is enclosed on the chassis that acts as a Faraday cage. Wiring is minimized in length, coupling and emission lines can be handled in a controlled environment not dependent on the end application wiring and installation and the installer EMC skills. This can be achieved using small modular servo drives.

EMC is not just passing certifications. It is ensuring that the system is robust and will function without causing problems to nearby devices.

Having a good understanding of EMC and applying it during the initial system design phase will solve most problems before they even arise.

Keeping the source-channel-victim frame in mind is very practical to solve these problems. The EMI mindset looks beyond the "pdf wiring diagram" and tries to find parasitic coupling paths between sources and victims. Sometimes, however, it is necessary to use the oscilloscope, spectrum analyzer to measure what is happening.

When facing interference emission problems start with the obvious source: the switching of the motor phases, and check if the "rules of thumb" of short motor cables, good grounding, shield the phases, and use motor choke have been applied. After that is 100% clear, proceed with other less probable hypotheses.

If having interference on the feedbacks consider digital filtering as it has the lowest cost and can be applied fast. If possible choose robust feedbacks with differential interfaces and CRC.

Having the drive close to the motor and if possible inside the enclosure solves most of the EMC problems encountered in servo drives, it maximizes the chances of passing EMC certification and does all at the lowest cost and with maximum simplicity.